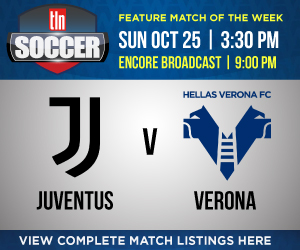 As a proud partner of the initiative, TLN Media Group joined RBC, the national network of Chambers of Commerce, Canadian business associations and more than 50 of Canada’s leading brands to help local businesses re-open and rebuild.

Thank you for continuing to buy, dine and shop local!

Toronto singer-songwriter, Julie Neff discusses her new single, “Over It” and the influences of Brazil, Spain and current events on the creation of her music.

Catch the season kickoff on Saturday, September 19th, only on TLN TV!

Discover how cultures unite through sports,  food and virtual travel from the comfort of your home with a vibrant lineup of new and returning favourites

(Toronto, ON – September 1, 2020) – TLN Television’s new season lineup colours your life with passionate personalities, action-packed sports, and new and returning lifestyle and entertainment programming. Featuring LIVE multilingual coverage of the Olympic Games Tokyo 2020, the return of Serie A Italian League Soccer, multicultural food and travel shows that virtually take us around the globe, blockbuster movies and star-studded music specials – this is TLN`s recipe for colouring the lives of millions of Canadians.

A September Kick Off (Literally!) on TLN with weekly live top-tier European soccer coverage, airing back-to-back matches every weekend and 200+ matches throughout the season, plus weekly best of matches weekends in primetime.

PLUS join TLN TV personality, Camila Gonzalez during each match intermission for a fun and informative dose of soccer culture in Canada, in a new season of original series, The Halftime Show.

Explore fascinating destinations across the globe, including South Africa, Thailand, Japan, Vietnam, Singapore, India, Fiji, Greece, Italy, France, and the USA. Learn handy travel tips and insights into the colourful local characters, the great attractions and, of course, what to eat and where!

Dermot Bannon, Ireland’s best-known architect, showcases stunning and unusual homes across the globe. From sunny Sydney to London city, from stylish Melbourne to the snowy landscape of northern Sweden, Dermot meets homeowners, architects and realtors who show him award-winning homes and incredible living spaces and experiences.

While traveling to some of Ireland’s most stunning locations on adventurous excursions, celebrity chef and tv personality Donal Skehan shows viewers the secret to cooking simple, healthy and tasty food perfect for pursuing a more active lifestyle.

In this season of the Emmy winning series, celebrity chef, restauranteur and TV host Lidia Bastianich takes viewers to Italy and invites them back into her kitchen as she creates new recipes, delicious recipes, and intimate moments with her family. Inviting everyone to join her at her table ~Tutti A Tavola a Mangiare~

Irish celebrity chef and TV personality, Neven Maguire discovers the Basque Country and La Rioja of Spain, two regions renowned for their vibrant cuisine and history. In each episode, Neven then returns home to Ireland to cook dishes inspired by his travels.

Catch a double-bill of the hottest blockbuster hits with back-to-back movies every Friday starting at 9P.

Music is the universal language that unites all cultures. Enjoy an incredible lineup of concerts featuring some of the biggest international stars including Ariana Grande, Pavarotti, Placido Domingo, Gloria Estefan, Avicii, Ricky Martin and many more

About TLN Television
TLN is the English-language specialty TV channel that adds colour to life through a rainbow of culturally connected programming and initiatives. The TLN lineup delights mainstream appetites for rich multicultural lifestyle and entertainment programming.  From international music specials and sports, exclusive and original food and travel series, to blockbuster films and unique original productions, TLN entertains and inspires a colourful life. TLN is part of the TLN Media Group family of channels.

As a multicultural advocacy leader, TMG selects, curates, produces and commissions unique and culturally significant TV and digital content distributed both in Canada and worldwide through TMG Worldwide Media Distribution.

Fall for TLN TV this season

Indulge in a vibrant lineup of new and returning lifestyle, sports and entertainment programming that serves up a world of colour!

TLN Television’s new season lineup colours your life with delightful personalities, taking us on scenic adventures in far off places and at home. Add blockbuster movies, star-studded music specials, the return of Serie A – Italy’s top tier soccer coverage and live multilingual coverage of the Tokyo 2020 Olympic Summer Games and this is our recipe for bringing more colour into the lives of millions of Canadians.

From nightlife rapper to entrepreneur, Kane Wav shares his story on finding opportunity in a time of crisis.

Today marks the start of Canada United Weekend! Show some local love Aug 28-30 by shopping or dining local. Plus, earn a chance to win one of 25 $10,000 cash prizes.

TLN Media Group is proud to join RBC, the national network of Chambers of Commerce, Canadian business associations and more than 50 of Canada’s leading brands to support Canada United, a movement to help local businesses re-open and rebuild.

Local businesses are essential to our economy and communities. These businesses need our help now more than ever.

Join the movement, spread the word with all of your contacts and show local some love.

As a multicultural advocacy leader, TMG selects, curates, produces and commissions unique and culturally significant TV and digital content distributed both in Canada and worldwide through TMG Worldwide Media Distribution.

Ontario Minister of Education, Hon. Stephen Lecce addresses questions, concerns and new protocol regarding the readiness of Ontario schools to welcome students back this September.

TLN and Univision Canada are proud supporters of the annual Carnaval del Sol Festival in Vancouver.  Although the pandemic changed the footprint of the festival this year, it did not dampen the spirit and passion that the celebration of Latin American culture and human connection brought to the city during a time when it is needed most. TLN is proud to celebrate multiculturalism and  to connect communities across Canada while staying safe and entertained.