The Importance of Remembering With ‘The Poppy Campaign’ | TLN Connects

Antonio Giorgi talks with Steve Gregory, Honorary Colonel, 2nd Field Regiment, Royal Canadian Artillery, about ‘The Poppy Campaign’ and the importance of remembering those who fought for our freedom, and those who continue to serve.

The results are in! #MyZucchiniTLN Contest | TLN Connects

During the COVID-19 pandemic many of us rediscovered the relaxing pleasure of growing our own vegetables. Backyard, urban and private vegetable gardens became therapeutic. In order to celebrate this year’s harvest, TLN Media Group asked Canadians to share their best photos of their home-grown zucchinis.

Thank you for all of your submissions from across Canada!

Congratulations to the winners—thank you for participating in #MyZucchiniTLN contest! 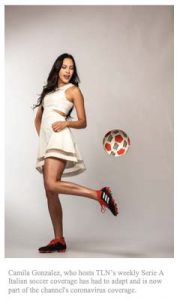 One day last week, during the daily phone-in press conference, Ontario Premier Doug Ford called Colin D’Mello of CTV News, “Travis.” Possibly he was confusing D’Mello with Travis Dhanraj of Global News. Possibly Ford was simply tired. Possibly it was all quite funny, or it wasn’t. A bunch of journalists who cover Queen’s Park chortled and debated the issue on social media. Then they moved on.

Everything is different now. The job of doing television day-today changed and morphed as it did for so many occupations. Day-to-day TV, especially TV news, is a hectic, close-proximity business. When you watch TV now, from local weather forecasts to late-night chat shows, everything is done differently. Today, this column is about two TV people coping and adapting.

Camila Gonzalez had to adapt quickly. About now in the calendar, Gonzalez, who hosts TLN’s weekly Serie A Italian soccer coverage – with her own distinct, freewheeling style – would be packaging interviews and information about the climax to the Italian soccer season. She’s not doing that, obviously.

“It was a shock, since Serie A was the first league to be cancelled,” she says. “I saw fellow sports broadcasters still had the NBA, NHL to talk about, while everything had stopped for us. I went from shooting all over Canada and Italy for each episode, to having to set up a small studio in my living room. From having professional camera people, lights and face-to-face interaction with guests, to having just me.”

The “just me” has spent almost two months as part of TLN’s continuing COVID-19 coverage. With Italy’s circumstances catastrophic, the coverage is crucial to its audience. (TLN is free on most cable services through June.) Gonzalez says, “I went from talking about something that brought people excitement to talking about a virus that put our world on pause. I try to bring as much information as I can to our viewers, but always with a silver lining. From mental-health coping strategies, tips for quarantine, latest updates and interviews with notable personalities, we are trying to keep people informed with an optimistic twist.”

The situation has the added, fraught aspect of being about TLN itself. The channel invested in live weekly soccer from Italy just when most European soccer coverage has shifted to subscription-only online platforms. It looked like a smart, albeit expensive investment. For Gonzalez, who had built a following with her breezy style, it all comes back to the sport, but with some perspective.

“I miss Serie A most of all. Soccer in Italy is a cultural pillar. It’s passionate and fundamental. My everyday life revolves around those teams, the players, the fans. Knowing how hard they’ve been hit has been tough to process. I want nothing more than for the league to return, but I realize right now that this is bigger than sports.“

Over on CP24, which offers news coverage of the Greater Toronto Area all day, every day, the format is usually rigid – there’s an in-studio anchor and reporters appear live from locations all over the GTA. One night in April, viewers were startled to see Cristina Tenaglia doing the anchor from what appeared to be the parking lot outside.

She was actually perched on the accessibility ramp from the sidewalk outside the building. “As part of our social-distancing measures, some team members are designated to the studio only, others are designated to the field only. I’m part of the field group,” she explained to me. “I haven’t entered our studio in weeks. “We were short an anchor the evening of April 8th and I was the willing candidate to fill in, but there was this conundrum: I’m not permitted indoors. The team set up a makeshift anchor studio out on the pavement, complete with a teleprompter, lights, even a heater as it started to get chilly. Preshow, we went through a test run. I was advised to keep the comb and hairspray nearby for the wind. Much disinfecting of microphones and other studio equipment was part of our preparation. My cameraman was positioned more than six feet away,” she said.

“Frankly, it was an instant success. I explained on air, during a live chat with meteorologist Chris Potter [who does the weather reports from the backyard of his home in Barrie these days], why I was anchoring at dusk, jacket on, hair blowing in the breeze, outside the comfort of our studio. It was a heartfelt explanation to our viewers about what is, for everyone, a challenging time.”

Then Tenaglia, another distinctly animated, uncontrived figure on local TV here, went home to watch TV with her partner. I asked her what she views for pleasure. She thought her answer was pretty funny: “I don’t binge watch anything. I know I’m an oddball. I don’t even know what channel Netflix is. Big fan of Grey’s Anatomy but I jumped onto the show about 13 years into it. I love reality TV and the brainless, the better! 90 Day Fiancé: Before The 90 Days is my current compulsion. I’m so invested I read Reddit threads on the show. I try to figure out what these couples are really about.”

That’s both fair and funny. If you cover hard news all days, you’re entitled to incautious escapism. We all are. Often, we think TV is just slick, easy to do. It isn’t. Nothing is.

Finally, this column continues with a “stay-at-home-period daily-streaming pick.” Today’s pick is How To Make It in America (Crave/HBO). This low-key, ensemble drama-comedy aired for two seasons starting in 2010. Ahead of its time, its depiction of twenty-something New Yorkers is often and oddly filled with moments of grace.

At its core, it’s about two Brooklyn friends trying to make a buck without selling out. Ben (Bryan Greenberg) and Cam (Victor Rasuk) are best friends who, when we meet them, look to be heading in opposite directions. Ben’s living quietly since his breakup with Rachel (Lake Bell) and he’s taken a job as a salesman at Barneys. Cam, on the other hand, is all about the hustle, the scam. He and Ben had borrowed $5,000 and began a skateboard business with a renowned skater who has now gone off his meds and gone AWOL. The money was borrowed from Cam’s dangerous, scary cousin Rene (Luis Guzman), who just got out of prison and wants his money back.

(Toronto, ON – April 2020) TLN Media Group – Canada’s most influential multicultural media company – has expanded daily production activities in the wake of the COVID-19 health crisis to include daily interview and news coverage on both TV and digital platforms in public service to viewers across Canada.

The goal of this daily production effort is to inform, reassure and inspire communities – millions of Spanish, Italian and English speaking Canadians. These special report interviews provide viewers with updates on the health crisis as well as interesting stories and initiatives with political representatives, business and community leaders,
celebrities and exceptional individuals. These reports are available on TLN Media Group’s three main TV channels, all of which are on a nationwide free preview as well as channel websites and social media accounts.

Watch featured interviews online and FOLLOW US on social for the latest coverage:

About TLN Television
TLN is the English-language specialty TV channel that adds colour to life through a rainbow of culturally connected programming and initiatives. The TLN lineup delights mainstream appetites for rich multicultural lifestyle and entertainment programming.  From international music specials and sports, exclusive and original food and travel series, to blockbuster films and unique original productions, TLN entertains and inspires a colourful life.   TLN is part of the TLN Media Group family of channels. | tln.ca

About Univision Canada
Univision Canada is the leading Spanish-language television channel delivering the best programming from the Hispanic world to Canada’s 1.8 million Spanish speakers. The lineup features daily news, award-winning telenovelas, talk and reality shows, live music specials and top soccer coverage. Univision Canada is a TLN Media Group owned channel and can be seen from coast to coast in close to 2 million homes on all of Canada’s largest pay TV platforms. | univision.ca

Dr. Ron Nusbaum from Back Clinics of Canada shares some tips and advice for staying home, working remotely and keeping your body and mind healthy during isolation.

We’ve all seen the viral videos of empty toilet paper shelves. But what does that mean for Canadians? CEO of Kruger Products, Dino Bianco joins us to discuss the impact of COVID-19 on the industry and provides a message of reassurance: Toilet paper is safe and available for all.

Are you passionate about Canadian multiculturalism?  Do you embrace the Latino lifestyle and culture of food, music and travel?  Love to work in a fast-paced, dynamic team environment?  Want to engage communities and be part of something that makes a difference?  If this sounds like you, and you also have experience working in the communications field then we want to hear from you!

Please email your resume and cover letter to [email protected]
*No phone calls please. Only those selected for an interview will be contacted.

TORONTO, ON – (November 12, 2019) – TLN Media Group is rolling out the red carpet for the biggest night in Latin Music with the network’s exclusive Canadian broadcast of the 20th Annual Latin GRAMMY Awards LIVE from Las Vegas at the MGM Grand Garden Arena. The 20th anniversary celebration will air LIVE Thursday November 14 on Univision Canada and TLN TV, both currently on FREE PREVIEW for music lovers across Canada to enjoy!

Stay connected on Univision Canada and TLN TV social channels as Camila gives viewers an inside look at the nominees, performances, fashion and the latest Latin music gossip throughout the Live broadcasts. Plus catch special ‘Best of Latin Grammys’ segments with Camila during the Encore Broadcast on Sunday, November 17 at Noon/et on Univision Canada.

The awards will be hosted by three-time Latin GRAMMY® winner, Ricky Martin as well as internationally acclaimed actresses Roselyn Sánchez and Paz Vega. Nominees include J Balvin, Marc Anthony, Luis Fonsi, Camila Cabello, Daddy Yankee, Rosalía, Nicky Jam and more. Canadian artist Alessia Cara is also up for two nominations for her collaboration on the hit record “Querer Mejor” with Colombian rocker, Juanes who has been named the Academy’s Person of The Year.